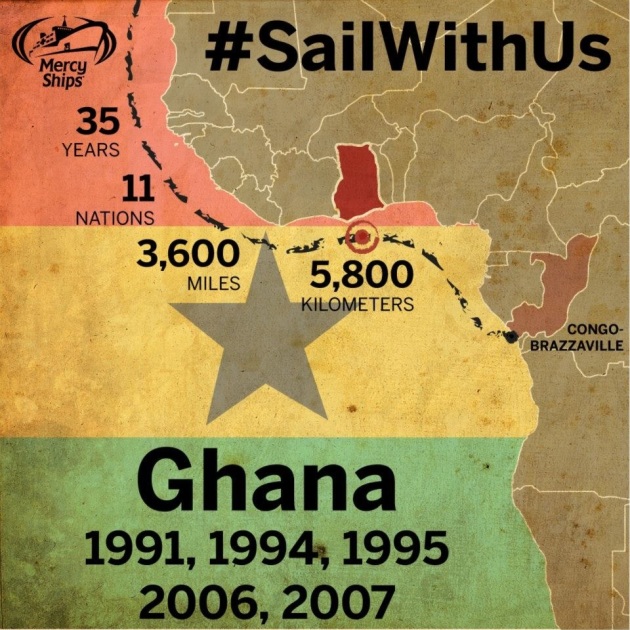 Today, we sail passed Ghana…getting closer and closer to the adventure ahead in Congo! We are grateful for every step along the way. ‪#‎sailwithus‬ ‪#‎mercyships‬ 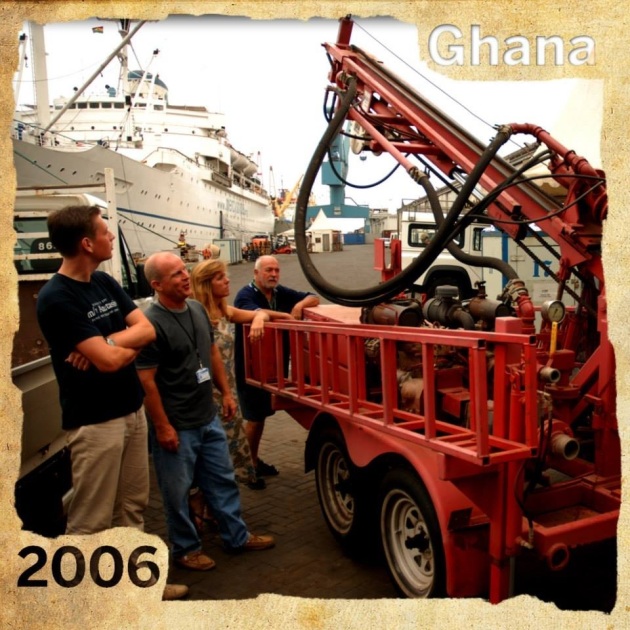 Did you know? Onboard the ‪#‎Anastasis‬, the ‪#‎AfricaMercy‬’s predecessor, there was a well drilling project. Mercy Ships crew members participated in Mainstay, a Mercy Ships program tasked with providing potable water and improved sanitation to rural villages in Ghana about an hour and a half away from the port. Crew members drilled 24 successful wells and educated 960 children on hygiene education. The team also trained 92 locals to be educators themselves, so that training could continue even after Mercy Ships left. ‪#‎sailwithus‬ ‪#‎mercyships‬

Ghana, 2006: They abused her, rejected her, and threw her out. But Abibata forgave them.

Abibata’s first two pregnancies had ended in stillbirth at the home of her husband’s family. It wasn’t until two days into the third pregnancy that things got bad enough for the family to take her to a local hospital. But it was too late.

Abibata had lost the baby and in the process suffered a birth injury that left her incontinent called VVF. Unable to control her bladder, Abibata leaked urine all day and night. The smell was so strong that her husband sought a divorce and his family kicked her out.

A local nurse told Abibata about a ship that was coming to Accra that gave free surgeries, she says that at first, she thought it was a trick.

Abibata’s fistula was repaired, and she no longer leaks urine or smells. Through her physical improvement came an emotional healing, Abibata says she has forgiven her ex- husband and his family. She doesn’t want old wounds to keep her from starting over.

“Thank you for making me see there are good people in this world and for giving me a new life.” ‪#‎sailwithus‬ ‪#‎mercyships‬

Cote D’Ivoire, 1991: A devastating attack left 1-year-old Marius’ face almost unrecognizable. Marius’ father, Jules, took him to a local hospital, but they were told that reconstructive surgery would cost $4,000 – money that a farmer like Jules would never have.
Marius grew and healed, but still suffered from behind his disfigured face. After learning about Mercy Ships, Jules brought his son to Screening Day in 1991. Dr. Gary Parker examined Marius and told Jules that Mercy Ships could help – for free.
A world where parents can’t afford life-changing treatment for their children can seem far away. But in West Africa, it is closer than we think. ‪#‎sailwithus‬ ‪#‎mercyships‬

I will return to my ship home in Congo on 8/14. On 8/28 we will meet the people who will become our newest friends onboard the Africa Mercy. Excitement is in the air. Can you feel it? Can you feel the love raining down from heaven, from the throne room of our Lord? I can!

Today we sail by Liberia. ‪#‎MercyShips‬ first field service in that nation’s capital, Monrovia, was in 2005. Have you been to Monrovia with Mercy Ships? Do share…‪#‎sailwithus‬

Side by side in Liberia: the ‪#‎Anastasis‬, left, and her successor, the ‪#‎AfricaMercy‬, right, meet in Monrovia in 2007. There, crew members moved out of the Anastasis and into the new surgery ship, carrying ‪#‎MercyShips‬ legacy from one berth to another. ‪#‎sailwithus‬

Please keep praying for my friends as they have a long way to go until they reach the Congo. I will join them on 8/14 after a vacation with my family and friends in the USA. My trip will be much faster than theirs.

#icantbreathe #justiceforgeorgefloyd #justiceforahmaud #justiceforbreonnataylor #blacklivesmatter #antiracist
Anti racist. Say it with me. It’s not enough to just be not racist. We need to be anti racist. We have to make these horrifying murders STOP! 💔💔💔 #antiracist #georgefloyd
Back in the land where the mask makes sense! #ornurse #travelnurse #montana
Just a little thing I did on Saturday. See the story ⬆️ #badlandsnationalpark #hikingforever
#mtrushmore
What a sky #sunrise #goodmorning #southdakota
Somewhere in #southdakota #sunset #roofnest #roofnestflock #roofnestsparrow
Good morning ☀️
To son#1, you got me as your mom when I was young and unprepared and inexperienced and abused and depressed. You taught me unconditional love, but I had to send you away for a year to realize what I was giving up. You were thrust into the first born role by no choice of yours and survived being the trial and error kid. I learned so much from you!⁣ ⁣ To son#2, thanks to your older brother, you got me as your mom when I was better prepared and more experienced and not being abused and much happier. You reinforced my belief in the power of unconditional love and I didn’t have to send you away to learn it. You became my second son and benefited from all the things I got right AND wrong the first time. You got a wiser mom because of your older brother. ⁣ ⁣ To my favorite adult sons, I wouldn’t be the person I am right now without you. The Lord didn’t gift you to me for the sole purpose of shaping your lives, he gifted you to me to shape my life. I am sooo thankful that despite all the mistakes I made along the way, you still love me and call me mom. ⁣ ⁣ I love you both! I love being your mom! #mothersday